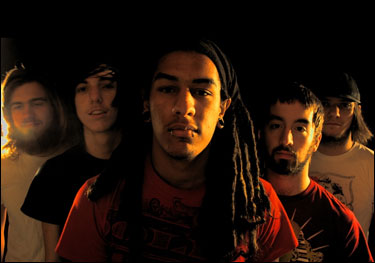 FOR TODAY
From the heart of the Midwest rises a beast whose ferocity and aggression is rivaled only by its poise and focus.  For two years For Today have clawed and scraped their way into the spotlight. Seldom is there to be found a band whose passion and integrity are matched by their technicality and musical merit.  As forthcoming about their faith as they are about their musical prowess, vocalist Mattie Montgomery sums up the band’s mission: "This has nothing to do with music and everything to do with our faith in Christ." But music is a catalyst and For Today uses their August Burns Red-meets-Between The Buried And Me sound to spread their message across the nation.

For Today have become widely known as one of modern metal's most technically proficient bands and have earned their spot by playing over 200 dates in 2007 alone.  Fusing extensive and prestigious backgrounds in both hardcore and metal and promising to up the touring ante in 2008 they have stamped their name in the hearts of fans from all across the globe.

For Today’s debut full-length “Ekklesia,” produced by Jamie King (Between The Buried And Me, The Human Abstract) is marked for release on April 1 and with the backing of Facedown Records (along with a relentless tour schedule) For Today stands poised and ready to stake their claim in today's modern metal scene.