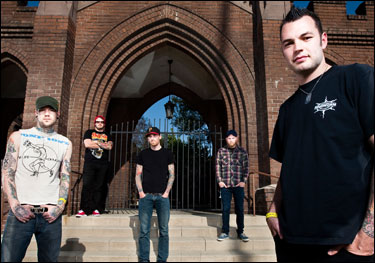 SLEEPING GIANT
Sleeping Giant charged onto the Southern California scene in 2006 with their bold and powerful live show, where in addition to being entranced by ominous guitars, crowds are met with burning passion from articulate front man Thom Green. The sincerity behind the words that pour out from Green's mouth is deeply rooted in the band's unwavering love for their fellow man.

Since the release of their debut album "Dread Champions of the Last Days" in May of 2007, Sleeping Giant went on to headline the 1st annual "Scream The Prayer" tour (Summer 2008), headline the sold out Facedown Fest in Pomona, CA (2008+2009). The underground swell of hype for this band has risen up and this new album is highly anticipated by devoted fans worldwide. Sleeping Giant will be on tour all summer as part of the "Scream the Prayer" tour in support of "Sons of Thunder."