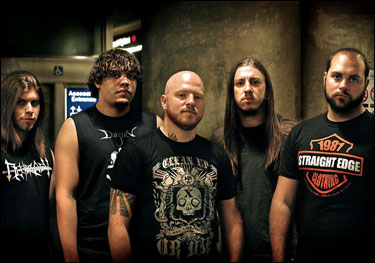 WAR OF AGES
WAR OF AGES draws a definitive line in the sand against fear and frailty with Arise and Conquer, their brand new album produced by As I Lay Dying frontman Tim Lambesis and his production partner, Daniel Castleman.

The band's convictions are as deeply rooted in strength through spirit as their music is based in intensely heavy but melodic and catchy metal and hardcore.  Their burgeoning and relentless concern for the human condition has blossomed on Arise and Conquer, an album full of positive metalcore that furthers their message of victory.

"Without pain, there could be no compassion.  And without hurt, how would we learn to heal?" asks singer Leroy Hamp, his empathy with the hurting youth of the world clear.  "These are the moments when men and women rise up and warriors are born."  Hamp and his brother, drummer Alex, certainly know about rising from pain.

In their life experience, they have dealt with kidnapping, abuse both physical and mental, and the violence that surrounded their criminal father and his backward beliefs.  Through their faith in Jesus Christ as redeemer and savior, the brothers soldiered on and have forged a life of their own choosing.

War Of Ages is as much ministry as heavy music and that spirit shines throughout the new album.  New guitarist Branon Bernatowicz adds his spice to main songwriter Steve Brown's already well-known classic metal and New Wave Of Swedish Death Metal-inspired chops, which first came to light on the band's prior Facedown releases Pride of the Wicked and Fire from the Tomb.  Bass player T.J. Alford rounds out the band, helping them deliver a powerful live show that has enthralled audiences on tour with diverse bands like Bleeding Through, Throwdown and Soilwork.

Lambesis brought a determined focus to the band's already solid songwriting.  After a month of intensive recording in Southern California, the boys who call Erie, Pennsylvania home emerged with an album that has both absorbed and surpassed their previous output.  With the kind of mastery that can only be born from fervent passion, Brown weaves melody with might, building a sound framework for Leroy's inspired and crucial storytelling.  Only years of collaboration and a thick friendship could produce the command and virtuosity heard on Arise and Conquer.

War of Ages will be storming venues all over the U.S. this summer in support of Arise and Conquer which releases July 22nd on Facedown Records.